On the face of it today’s young people have never had it so good. Teenage pregnancies are down, fewer of them smoke and they drink less than previous generations.

So what have they got to be depressed about?

Well they spend an awful lot of time on social media, posting selfies, seeking approval from others. “Like me, like me” they seem to beg.

It’s a recipe for disaster and means they are continually comparing themselves with others. And it’s all artificial.

They spend hours making themselves up for selfies. I’ve taken loads of photographs at parties and invariably the women want to check the photos to make sure they’re OK.

Whether its posting selfies or posting posed photos on Facebook using cats, cuddly toys and even their babies as accessories, it’s all about wanting approval. Over half of teenagers are said to spend more than three hours a day on social media. (I’ve posted before about my views on Facebook)

And this is the most risk-averse generation we’ve seen for ages and maybe that’s part of the problem. No-one dares misbehave any more in case it gets on social media (as it will) and is then held against them later in life e.g. at job interviews.

It’s been said that young people work harder at schools. I don’t believe that for one minute. Exams are easier, course work is often group work and there has been such grade inflation over the years (at all levels in the education system) that you can’t rely on the grading system.

The psychological distress reported includes sleep loss, inability to concentrate, feeling unhappy and worthless. Girls report suffering these twice as much as boys (30% of girls).

Whether or not social media is totally to blame it clearly plays a part. The head of the charity Sane believes the internet has played a huge part. No longer can students get relief from school or peer pressure at home. It’s now always-on.

But lets not forget pushy parents. Kids from better off families report higher levels of stress and anxiety. Lower status children seem to suffer less – perhaps because they have lower expectations, or maybe because they are more resilient.

Schools which have banned smartphones report better results. Parents need to think about reducing screen time and switching off the wi-fi.

As I’ve posted before about smartphone users – Get a Life!

The government has promised to put £1.4 billion into providing mental health support for young people. Maybe we should start helping them closer to home.

A visit to the Yorkshire Sculpture Park this morning as it was a lovely day and ideal for taking photographs. As I walked down into the park I saw the four large hoardings with such a powerful message. 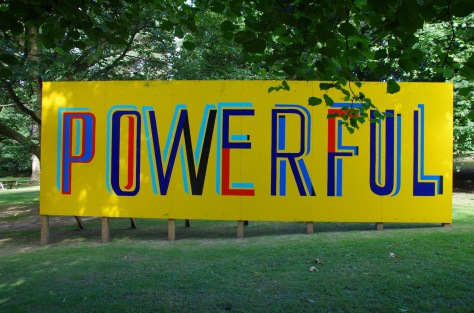 Give children free reign to express themselves through music, art, crafts, in fact anything that enables them to use their imagination and create new worlds for themselves……..and they do not need a computer or tablet to do that!

In the last year or so I have penned a number of blogs about the way parents wrap their children in cotton wool and create a cocoon of safety around them on the grounds of “keeping them safe.” They are not allowed to play in the open air as they may get some dirt on themselves and be exposed to germs or contract some mythical life threatening disease.

The attitude of schools is compounding this problem by banning such games as football in the playground, conkers, throwing snowballs or just running around if the playground is wet. We are creating a generation of unfit, overindulged and self – centred individuals who, by the time they reach adulthood are often incapable of doing even the simplest thing for themselves (talk to any Student Support Officer in a British University and you will find out what I mean).

The climbing tower in Keswick

I first spotted this a few weeks ago after noticing kids walking round eating fruit.

My first thought was that they’d pinched it or were helping parents reduce the household bill by eating en route to the check-out.

But no, Tesco are trying to get kids to eat more healthily, removing sweets from check-out lanes and offering free fruit as part of their EatHappy Project.

So well done Billie (Community Champion) and the team at Tesco Burnley!

Update 29 July 2016:  Pity scheme has been suspended at Burnley store because of adults taking the fruit when it’s being rolled out in 800 other stores.

Matt  Davies, the new CEO is claiming the credit according to the Sun while the Times says the suggestion came from a Tesco worker in Lincolnshire!

Naming Consultancy services in Europe and America are offering anxious parents help in the delicate task of naming children.

One such company, New York-based My Name for Life, says its job is to “hand-pick names that match a family’s priorities” and runs a hotline on which parents can confide their hopes for their babies.

Most parents go to her because they can’t agree on a name or “want an American one that can be pronounced easily overseas” (like Ted, Bobby, Donald?). Sherri Suzanne, the company’s founder can spend 30 hours doing research and her charges start at several hundred dollars.

In Switzerland a company called Erfolgswelle (Success Wave) is reported to charge $29,000 for each child it names. Its founder Marc Hauser says that parents should consider a child’s name like a company brand name and it can take hundreds of hours of work to select the right one.

It makes you wonder if Gwyneth Paltrow took such advice when she named her children Apple and Moses and what about the Zappa children? Michael Jackson named his son Blanket (must have been a comfort to him) and let’s not forget Saint K, North West and Bear Winslet.

Skylar (derived from the Dutch surname Schuyler) is now more popular than Mary and can also be used for a boy’s name. Names change as people want to emulate their heroes. Their kids might take a different view when they grow up of course!

In France, Denmark and New Zealand there are laws restricting  what parents can call their children. New Zealand has rejected names like Regal, Christ and Queen. Iceland is pretty strict too.

France is now making it easier for people to change their first names. Until now it has been a long and complicated process convincing a judge that your  request for a name change has a “legitimate motive” and that your given name, your etat civil, causes hardship.

One group likely to take advantage of the easier process are young adults who want to get rid of lower-class names like Kevin – named after Costner or Keegan who were popular in the 1990s.

Research at the Paris Sorbonne University found that Kevins were 30% less likely to be recruited than men with more traditional names like Arthur.

Men and women with muslim names are also likely to take advantage to overcome the discrimination that candidates with migrant names experience 80% of the time.

The opposite will also apply with people converting to Islam able to adopt a muslim name.

And some people will want to adopt a younger-sounding name according to sociologist Baptiste Coulmont who specialises in names. “There’s a rejuvenation by first names …. you abandon Catherine and become Lea”

Does all this really matter? Well yes.

US Research on the effect your name has on people in terms of trustworthiness, playfulness, intelligence and ambition, found that men ought to be named Stephen, Christopher, Kenneth, or Thomas and girls should be named Elizabeth, Mary, Anne, Jessica or Jennifer.

Another American study showed that CVs with white-sounding names did better than ones with black-sounding ones (or even stupid, bizarre ones).

And for politicians manes are so important. So its bad news for Donald and Hillary. Not only are they the most widely disliked presidential nominees for over 40 years but have names no-one wants to give to their kids anymore.

Donald was one of the most common names over the last century and was the 13th most popular when Mr Trump was born in 1946. The name fell out of the top 100 in1991, the year that Mr Trump was divorced by his wife,and has now slumped to 441st place, its lowest standing since 1900.

Hillary has fared even worse with only 136 babies so named last year and din’t even make the top 1,000 girls’ names. Still either of them will have more poplar names than the current President; there were only eight Baracks last year.

Noah and Emma are currently the most popular names in America for the second year running with Mason, Ethan, Ava, and Harper also popular.

In England Eleanors are more likely to get to Oxbridge than Jades. In England we can call our kids what we want as long it’s not offensive e.g. calling a girl Cyanide (when does bad taste become offensive?).

The most popular names in England and Wales in 2015 were Oliver, Jack, and Harry for boys, and Amelia, Olivia, and Isla for girls.

What is it about young children that they are able to see the world in a very different way than adults. They have that capacity to cut through the crap and intellectual drivel spouted by their so called elders and betters.

Anyway, I offer you the following and I am indebted to Psyvirtual on Facebook for the original posting.

Leaving two grandchildren (age 4 and 2) to play for a few minutes in the yard gave them the opportunity to raid the garage for gardening tools and create a sculpture. They were adamant it was an angel and who am I to disbelieve?