There were no buses on New Year’s Day but the trains were running. So a quick 20-odd minute train journey from Burnley to Hebden was called for. A deserted station with a Xmas tree greeted me but I hoped for more.

I’ve got to say that when I walked into town, past a deserted play area, there wasn’t a lot going on with many of the shops closed and some people having the impression that the trains weren’t running either. 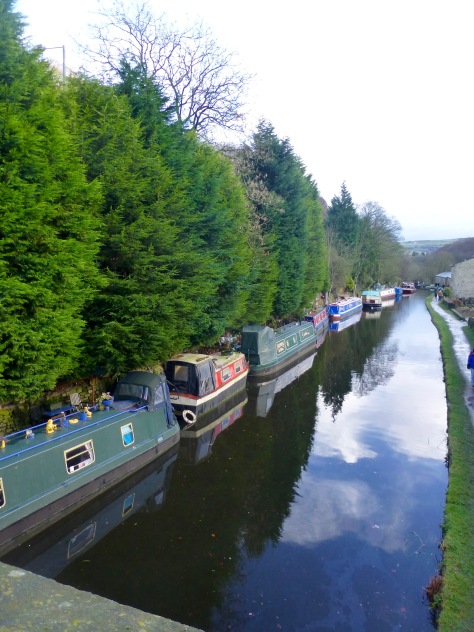 However I had a great meal in the Old Gate pub and restaurant. It wasn’t the quickest service but it was packed and the staff were friendly.

It was also the best burger I’ve had for ages, and the kids meals were enormous. 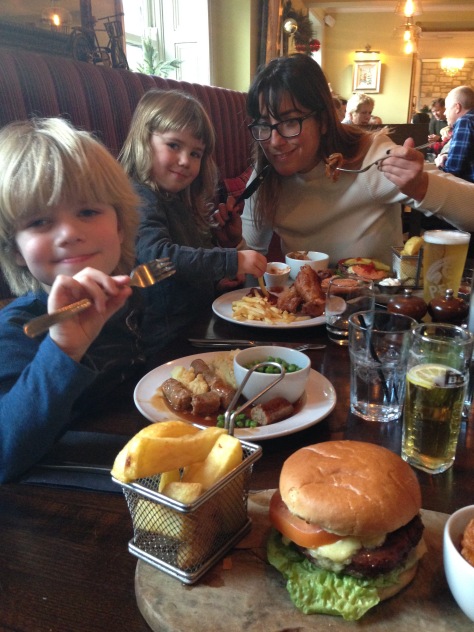 So a decent meal before we embarked on our journey from a deserted platform back to Lancashire.

Not the first visit and it won’t be the last.

Sad to report that the Bobbins has lost its taste for Portuguese cuisine despite my being told new chef would maintain it on the menu.

Also on my last visit in the afternoon there were no hot dishes – just coffee and cakes. This is sad as it was a unique experience which seems to have lost its way.

A friend had told me about this new restaurant  tucked away in Oakmount Mill on Wiseman Street near the “On the Embankment” canal redevelopment in Burnley.

Called The Bobbin (presumably a reference to the former cotton town’s industrial past) it comprises a restaurant area, decorated with cotton mill  artefacts, and a more relaxed sitting out area with settees – presumably for those patrons who just want a coffee or a glass of wine.

On its Facebook page (which has more photos) it describes itself as a cafe and mediterranean restaurant but the menu is portuguese influenced with various piri-piri dishes and sea-food. The chef and co-owner David O’Hara learned to cook portuguese food in the Algarve and his wife Beatriz is portuguese so it should be authentic!

The background music is Fado (plaintive, melancholic folk songs) with Mariza featuring heavily (although as a member of staff said “you can have too much of Mariza”. If you don’t know of her check her out below).

I chose a swordfish steak which was delicious and melted in my mouth and I accompanied it with a glass of white wine. Unfortunately they only had red portuguese wine but that may change.

It’s not a fast food service but worth the wait and the staff are friendly and want to know you have everything you need.

On Saturdays they serve the famous portuguese custard tart (pastel de nata) and they also prepare a Cataplana (Seafood stew) if you book it in advance for 4 people.

And if you want to hear some Fado here is Mariza singing “Ó gente da minha terra” (Oh people of my land).

FYI According to some sources “bobbins” is also old northern slang for something that’s rubbish (appropriated from cockney rhyming slang – bobbins of cotton i.e. rotten). This definitely does not apply in this case. Just the very opposite in fact.

here are some sensible ones from Dr Mark Porter who writes for the Times (with my own comments added):

Denmark has opened a village equipped with a music library, restaurants and shops reserved for dementia sufferers.

Svendborg Demensby on the island of Funen is the first of its kind in Denmark and is modelled on similar villages in Italy, Canada and the Netherlands.

The village of 125 homes was developed on the site of an old brewery which had already been used as a care centre for the elderly. The idea is to give residents the feel of living in a small town and is expected to give dementia sufferers a safer environment and a more fulfilling life in comparison with ordinary sheltered housing. It’s a pilot scheme with plans to open similar projects in Aalborg, Odense and Herning.

The Danish Alzheimer’s Association cautiously welcomed the initiative but voiced worries about the villagers being cut off from the outside world. “It concerns us when special dementia villages are being…

It turns out that the toys inside the Kinder chocolate eggs are made by child labour in Romania according to an investigation by the Sunnewspaper.

Families in this, one of the poorest of the EU countries are being paid as little as 20p an hour for making the toys at home.

Child exploitation is not new in Romania. It is probably as famous for sending gangs of child pickpockets to the UK as it is for being the home of Vlad the Impaler.

Apart from the child exploitation experts say there is also a risk of food poisoning if the toys have been assembled in unsanitary conditions.

A whistleblower said “Customers would expect products which go inside children’s chocolates to be made in controlled conditions but so many of the toys are being made in peoples homes that effective quality control is impossible”.

“Ferrero (the Italian chocolatier that makes…

Gone are the days of ladylike behaviour. Increasingly women are copying the worst behaviours of men. They are just as likely as men to troll partners online; they are swearing more than men (who have cut down); and drinking more than ever before.

Teenage girls in the UK are twice more likely than boys to get drunk than almost anywhere else in Europe where it is the other way round. They are also more likely to be drink-driving than men from the age of 30 with a doubling of the number of women convicted for it since 1998.

There are currently almost a hundred women in prison for violent behaviour, up a third, and over a hundred serving time for serious sexual offences, three times the number, compared to ten years ago. 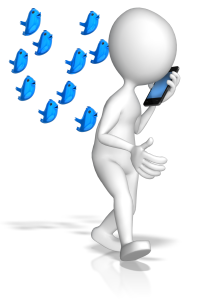 Just the presence of a smartphone or device is enough to disturb children’s sleep patterns as they anticipate the possibility of getting a message and can’t relax.

Using devices  at any point in the 90 minutes before bedtime more than doubles the risk of a poor night’s sleep. Even leaving it charging in the corner can have a detrimental effect, possibly because children are subconsciously engaged with them if they know they are within earshot.

Researchers ta Kings College London examined the digital behaviour of 125,000 children across four continents. It’s known from previous studies that around three-quarters of children and adolescents have at least one device in their bedroom at night.

Screen-based media may adversely affect sleep in different ways: psychologically stimulating the brain, delaying or interrupting sleep time, and affecting sleep cycles, physiology and alertness. They effect both the quality and the duration of sleep.

Sleep is undervalued but…

It’s the men with love handles, slightly overweight,who live longer, are better at passing on their genes – and are more attractive to the opposite sex! A recent study of women in Latvia confirmed that such men are more sexually attractive than lean men.

It’s a mystery why men remain fertile for so long after they have passed their reproductive and physical peaks. 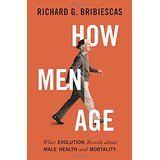 Richard Bribiescas, anthropology professor at Yale University thinks he knows the answer. In his book “How Men Age” he sets out a theory about pudgy dads which suggests that the slow ebbing of male sex hormones after the late teens is the key to longevity not just for men but also for women.

Most men become slightly fatter after fatherhood and find it increasingly difficult to build muscles as their testosterone declines. this however prolongs their lives and strengthens their immune…

In Mexico and parts of South America they celebrate “Dia de Muertos” on 1 and 2 November which coincides with the christian festivals of All Souls or All Saints days.

Christian missionaries often repurposed pagan festivals for their own purposes but the people in these regions still combine older beliefs, which may go back to the Aztec’s Lady of the Dead,  who looked after the bones of the deceased, with the catholic church events.

They believe that, starting at midnight on 31 October, the spirits of dead children come through the gates of heaven to be reunited wit their families for 24 hours.

Altars are stacked with flowers, food including special bread “pan de puerto“, and drink with toys and candles for the angelitos. Folk-art skeletons and sugar skulls provide the final touches. 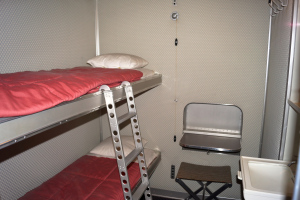 The Times travel section has identified a list of things which it believes irritates us when staying in hotels.