Unfortunately their first outing in this season’s Premier League ended in a defeat at Turf Moor against Swansea City who scored late in the second half.

Burnley should have had a penalty just before that when the Swansea goalscorer pulled Keanes’ shirt in the goal mouth but referee and linesman managed not to see it. (do they ever feel embarrassed when they watch MoTD and realised they’ve made a mistake?) 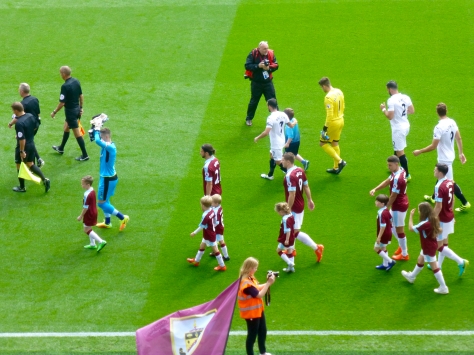 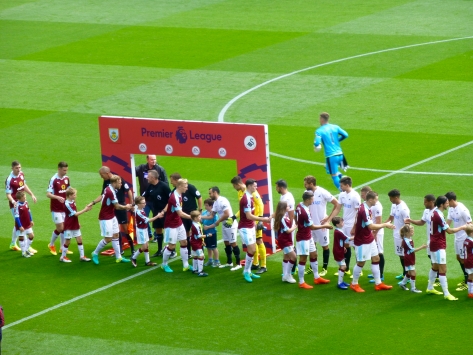 But we’re in good company on the same points as last year’s champions Leicester City.

So onwards and upwards for the only English-owned team in the division!

I couldn’t believe it when I read in the Lancashire Telegraph that Buzz Aldrin, the second man to land on the moon on July 20 1969, had actually been in Lancashire giving a talk and signing books.

Aldrin was the first man to perform a space walk in 1966 on a Gemini 12 mission before his historic Apollo 11 mission with Neil Armstrong when they became the first humans to stand on another world (as far as we know!)

Aldrin was a key part of the space programme developing underwater training techniques to simulate weightlessness and designing docking and rendezvous techniques. All this on computers that had less power than commonplace domestic items today.

So why was this great man in Lancashire?

He spent 4 hours at Westholme School’s Croston theatre talking to an audience of 700 people from all over the UK about his career as a US fighter pilot and his time at NASA.

There were models of Apollo 11 on stage made by the former chief waxworks artist at Madame Tussauds. 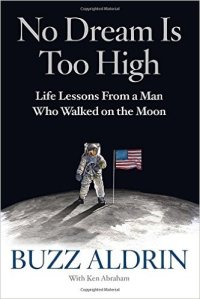 He then signed 750 copies of his new book “No dream is too high. Life lessons from the man who walked on the moon” until late in the evening. He’s 86 years old and still has the energy to do this.

He even found time to don a jester’s hat in Burnley FC colours. This man is truly a legend!

This is just one of three events arranged by his publisher the others being a similar talk in Bath and  a book-signing in London.

Photo appeared in Lancashire Telegraph but looks like a smartphone shot and uncredited. 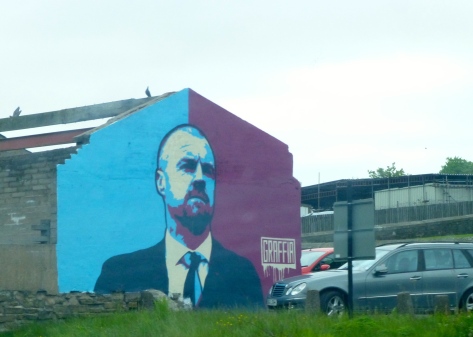 Spotted in Burnley this week. A tribute to a legend Sean Dyche, the manager who got us into the Premier League twice. One of Burnley FC’s greats.

See the story of the club’s promotion to the Premier League as champions,

Burnley FC will be given a victory parade today around Burnley.

Unfortunately I will be elsewhere but I noticed that the Mechanics Institute has put up the same banner as last time the team got promoted.

So apologies for recycling an old photo, but here we go again!

In the final game of their Championship season Burnley finished as champions by beating Charlton Athletic 3-0.

Sam Vokes gave Burnley the lead at Charlton in the 20th minute with his 16th goal of the season. George Boyd scored early in the second half followed by Andre Gray, his 25th of the season (23 for Burnley).

Burnley increased their unbeaten run to 23 games, against every other team, a post-war record – and kept their 20th clean sheet of the season.  In fact the stats mirror their last promotion; 26 wins, 15 draws and 5 losses with 93 points.

What a class act Joey Barton turned out to be taking stick in every game , and how vital were Michael Keane‘s late equalisers against our two main rivals Brighton and Middlesbrough?

So after getting promotion via the playoffs, then as runners-up to Leicester, Burnley now go up as worthy champions , the first time since 1973.

Burnley clinched promotion to the Premier League today after beating QPR 1-0 at Turf Moor and extending their unbeaten run to 22 games.

It was an edgy first half with the visitors thwarted on 5 occasions by goalkeeper and captain Tom Heaton, who deservedly got the man-of-the-match award.

The second half was a different matter and whatever manager Sean Dyche said in the dressing room paid off. The goal came in the 61st minute when Sam Vokes headed David Jones free kick into the net for his 14th of the season.

Burnley thought they had doubled the score a short time later but it was disallowed. Just as well that QPR could only hit the post after that.

With the other promotion contenders Middlesborough and Brighton only able to draw this weekend and playing each other next week it meant Burnley were promoted. Not champions yet but that’s a possibility in their last game next week away at Charlton.

As is traditional at the last home game of the season the manager and players come out onto the pitch to show the supporters their appreciation. As usual this is preceded by a pitch invasion! 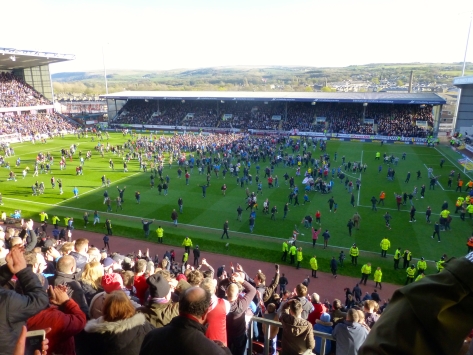 This is the 3rd time Burnley have been in the Premier League and the second time under manager Sean Dyche (pictured above) who was appointed in 2012.

They were first promoted via the playoffs in 2009 when they beat Sheffield United 1-0 at Wembley through a stunning Wade Elliott goal. That after 33 years in the lower divisions. 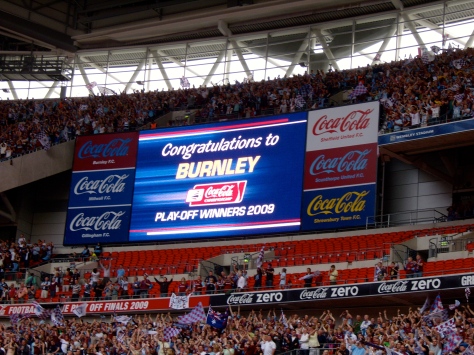 That was something I thought I’d never see in my lifetime and I only went to Wembley because my two sons dragged me there.

We didn’t survive the season and had to wait until 2014 when we were promoted again as runners-up to Leicester City. This weekend’s opposition QPR also went up via the playoffs.

Again we only survived one season fighting relegation with QPR and Leicester (crowned Premier League champions today) at one stage. So to go straight back up is remarkable. It shows a lot about the team spirit and resilience that Sean Dyche has inculcated in the team in which he used only 25 players.

Burnley’s aim next season must surely be to stay in the Premier League.

FYI Burnley was a founder member of the Football League in 1888 and adopted claret and blue to emulate the top English team at the team, Aston Villa, now a shadow of its former self.

The home ground since 1883 has been Turf Moor and it is the longest continuously professionally used football ground in the world with a natural turf and the longest in the top tier in the world. 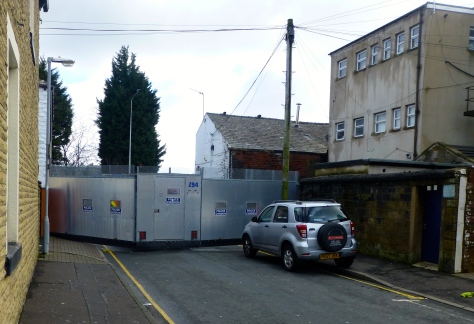 Yes it’s not Belfast but an old industrial town in Lancashire. The occasion? The local derby with hated rivals Blackburn Rovers from just 15 miles down the road. 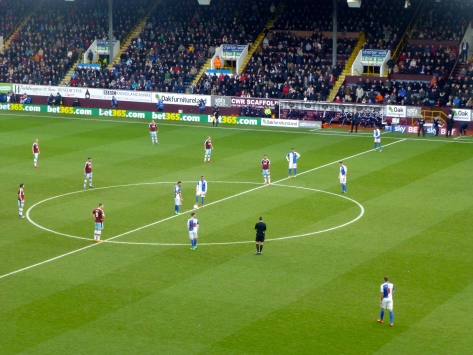 Although Burnley has won the last three games and drawn the 3 before that it’s their first home win and double against the Rivers since 1978.

Burnley FC, the team that against all odds gained promotion to the Premier League this season, had to wait until Monday night for their first game due to TV scheduling.

And their first game was against the team seen as likely champions – Chelsea.

The game didn’t end well for Burnley who lost 3-1 to a taller, heavier, more skilful  – and richer team. Chelsea have spent more on transfers in the Summer (and more than any other club in the last 10 years) than Burnley have ever spent in their existence since 1888!

Chelsea are also the club with the biggest debts but are bank-rolled by a Russian oligarch who made his billions in energy supplies and has remained on Putin’s good side.

So onward and hopefully upward this weekend at Swansea!